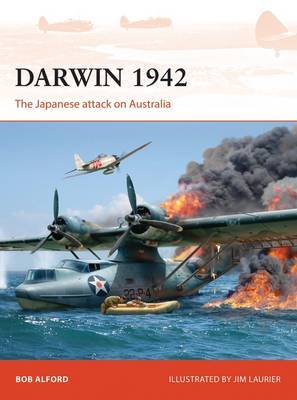 Darwin 1942: The Japanese Attack on Australia

Following the devastating raids on Pearl Harbor on 7 December 1941, lightning advances by Japanese forces throughout the Pacific and the Far East, and a desperate battle by the Allied command in the Dutch East Indies, it became evident that an attack on Australia was more a matter of 'when' and not 'if'. On 19 February, just eleven weeks after the attacks on Pearl Harbor and two weeks after the fall of Singapore, the same Japanese battle group that had attacked Hawaii was ordered to attack the ill-prepared and under-defended Australian port of Darwin. Publishing 75 years after this little-known yet devastating attack, this fully illustrated study details what happened on that dramatic day in 1942 with the help of contemporary photographs, maps, and profiles of the commanders and machines involved in the assault.

A highly illustrated account of the Japanese aerial assault on the port of Darwin in February 1942 - the first attack ever mounted by a foreign power on Australia.

Raised at Bacchus Marsh in the state of Victoria, Australia, Bob's interest in aviation stems from his father's involvement from the Kingsford Smith era and the Victorian Aero Club of the 1930s. Bob joined the RAAF in 1966 and served 20 years as an Armourer in a variety of squadrons and postings, many of these at overseas bases. Following 'retirement' from the RAAF Bob was commissioned to undertake site surveys and report on military and aircraft crash sites in the Northern Territory. He was later appointed Director of the National Trust and was involved in the 1992 War Service Memorial Year, during which he wrote the first edition of Darwin's Air War. He also prepared many papers, co-wrote a number of publications and books and provided research and other services to a range of individuals and organisations, both in Australia and overseas. Bob was later appointed Chair of NT Committee for the Federal Government's 1995 Australia Remembers commemorative program and in 1999 commenced his own business as a heritage consultant. In 2002 he was appointed as Chair of the NT Heritage Council, an appointment he held for five years. In April 2007 Bob and his Thai wife, Pat, moved to Thailand, where they now reside in a village on the outskirts of Lampang in Thailand's north. Bob has retained his interest in the aviation history and heritage of the Northern Territory. He has extensively rewritten Darwin's Air War (2011) for the Aviation Historical Society of the Northern Territory and has recently self-published his latest work, Japanese Air Forces over the NWA 1942-1945. He is currently researching The Japanese In Northern Australia 1942-44, Darwin Defenders the 49th Fighter Group over Darwin and Aviation Archaeology.